The Tea Research Institute of Sri Lanka (TRISL) which comes under the purview of Ministry of Plantations is the apex body mandated to generate and transfer scientific knowledge and technologies for the stakeholders to improve productivity and quality of Sri Lankan tea in a most profitable and sustainable manner. It was established in 1925 by an act of Parliament and presently is situated in St. Coombe’s estate, Talawakele. Since then, TRISL has been leading tea research in all aspects of tea cultivation, processing and product development. In the year 2020 the TRISL completed its 95th year of excellence in plantation crop research uplifting the name of ‘Ceylon Tea’ into the highest level of recognition in the world.

Tea is a perennial evergreen crop grown from almost sea level up to about 2200 m above msl. The tea land extent in Sri Lanka is over 200,000 ha and are commonly found in the wet zone and some parts of the intermediate zone. Tea is usually established in the field on contours at 1.2 m x 0.6 m spacing and hence, there are about 12,500 bushes per hectare. In commercial plantations, branches are pruned time-to-time to train the tea plant into a small bush with a flat canopy surface (plucking table) maintained at a convenient height for harvesting of shoots. As the growth rate of the tea plant varies in different regions (Up, Mid, Low and Uva) and with environmental factors, tea bushes are required to be pruned once in every 3 to 5 years, which is known as pruning cycles. Within a pruning cycle, height of plucking table increases gradually from about 0.6 m to 1.05 m.

The tropical climatic pattern in Sri Lanka results in an unsynchronized pattern of shoot growth. Consequently, a tea bush contains shoots of different size categories at varying maturity levels basically recognised by the number of leaves in a shoot. All shoots having an equal number of leaves can be grouped into one generation (e.g., Bud+1Leaf, Bud+2Leaves, etc.). Usually, there are about 5 to 7 different shoot generations in a plucking table just before harvesting (Figure 1). Moreover, two distinct types of tea shoots can be identified in a tea bush i.e. active and dormant shoots (banji). An active shoot has a large apical bud while a banji is characterized by a barely visible miniscule apical bud. A growing tea shoot has several leaf appendages viz. scale leaves, fish leaf, flush (normal) leaves and apical bud (Figure 2). The fish leaf is smaller than the normal leaf and has no serrated margin. The colour and size of leaves/shoots can vary with different cultivars and growing (soil, climatic and management) conditions. 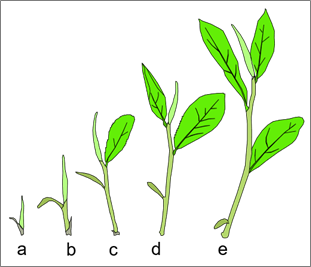 Figure 2: Leaf appendages of a harvestable tea shoot and points of harvesting

Harvesting of tea shoots is also termed as plucking and commonly done by female workers (pluckers). The correct maturity of a harvestable tea shoot is bud with 3 leaves (Bud+3Leaves). Other actively growing smaller shoots (Bud+2Leaves or less) are called ‘arimbu’ which are yet immature to be picked and hence, left aside for harvesting in a forthcoming round as heavier units. However, all dormant (banji) shoots are required to be removed irrespective of their size or number of leaves at every harvesting. This process is known as selective harvesting of tea.

When tea bushes are manually harvested, there are two points at which a shoot can be picked viz. immediately above the fish leaf (fish leaf plucking) and leaving a normal leaf above the fish leaf (single or mother leaf plucking) (Figure 2). The former is adopted during wet weather (rush crop season) when growth of shoots is fast. In order to stimulate shoot growth and also to increase efficiency of harvesting, the top surface of the tea bush canopy (plucking table) should be evenly maintained. Further, smaller shoots (arimbu) and maintenance foliage should not be damaged during harvesting.

Usually, a well-maintained tea land in Sri Lanka could yield more than 2000 kg/ha/yr of made tea. This corresponds to a green leaf yield of about 9300 kg. In Sri Lanka, about 40-50 manual harvesting rounds are practiced per annum due to continuous growth of tea shoots supported by year-round rainfall and sunlight. With the selective process of manual harvesting of tea shoots, about 10-12 workers (pluckers) are required to cover one hectare (12500 bushes) of tea within a day. Therefore, a plucker harvests about 1000 tea bushes a day and her daily output could be more than 20kg/day. An average weight of a harvested shoot could be considered as 1 g. Nevertheless, the plucker requirement and output considerably vary with the growing conditions (mainly yield) of the field. Excluding time spent for meals, tea, etc. a working day can rationally be considered as 5-6 working hours. The harvesting of tea is quite a tiring and labour-intensive operation consuming about 70% of total field work force and contributing to about 40% of the COP of made tea.

Of the plantation crops grown in Sri Lanka, tea is reported to be the highest labour consuming crop. With the declining labour force in the plantation sector, quality of field operations in tea estates particularly tea harvesting has been adversely affected. This has resulted in decline in both crop and quality. Furthermore, young generations of workers keep away from estate work due to hard work of manual field operations and poor social recognition. This rationalizes the need for development and introduction of a motorized selective tea harvester suitable to the different terrains and growing conditions in Sri Lanka.

Past observations on motorized tea harvesting

In addition to above motorized machines, the TRISL has also tested varying models of hand-held shears. These investigations have led to the invention of a Selective Harvesting Shear (TRI Selective Tea Harvester) which could double the plucker productivity. However, this is also a manually operated device. Considering the present situation of labour scarcity, a motorized selective tea harvesting machine with greater output is a must to ensure sustainability of tea plantations with the essential feature of selectivity of plucking mentioned above.

Although, tractor mounted and self-propelled large machines are also used in other countries such as Japan, China and Indonesia etc. such machine cannot be used in Sri Lanka due to various reasons such as sloping terrains of tea plantations, presence of shade trees and other obstacles (e.g., drains/terraces etc.).

Performance of the machines tested

None of the motorized harvesting machines tested in Sri Lanka could harvest tea shoots selectively leaving arimbu shoots on the bush. Therefore, harvested crop contained mature foliage and twigs etc which were to be removed by manual sorting. Although many of these portable machines are originally designed for single/two operators, they required one more assistant to hold and guide the leaf collecting bag in our tea fields. Average output of machines was in the range between 50 (small machines) and 350 (large machines) kg/day. When extra workers employed for sorting out of coarse leaves and cleaning etc. and holding/guiding the leaf collecting bag were considered, the actual worker output was estimated to be in the range of 20-60 kg/worker/day. Depending on the length of blade, the extent harvested by a machine was in the range of 0.1ha (small machine) to 0.8 ha (larger machine) per day. The fuel consumption of motorized harvesters varied in the range of 4-5 l/day. The single charge of a battery was sufficient to work for about 5-7 hours. Due to non-selective harvesting of shoots leading to extended frequency of harvesting (plucking round) tea yield under mechanical harvesting declined by around 30-50% in comparison with that of manual harvesting. In order to minimize maintenance foliage being cut and mixed with the crop, few attachments (steps/comb-like structures) were fixed to the harvesting section; but such modifications made no significant improvement.

The most recent experiments of the TRISL on mechanical harvesting focused on the physiological impacts of motorized harvesting and identified three basic impacts leading to crop losses viz.,

These three impacts affected tea yield-determining physiological parameters such as; yield components (shoot density and average shoot weight), shoot growth, dry matter accumulation (both leaves and branches), rate of photosynthesis, root starch reserves, etc. Accordingly, RAS contributed 55% of the yield reduction followed by HSH (15%) and RMF (12%). This emphasized the importance of selectivity in tea harvesting under local tea growing conditions. Further, it was quite clear that crop loss under motorized harvesting was largely related to bush physiology and hence, cannot be simply averted by changing the cultural practices, etc.

Figure 3: Selective harvesting of tea shoots (see the shoot to be harvested and plucking level)